After taking a couple weekends off for vacation with the family, it was a great day fishing today on my home turf of the Beaver Tailwaters.  The temp was a nice and cool 45 degrees with a on and off again strong breeze from the north. Fished just down from the upper handicap access to the top of the Y2K hole.  Started fishing around 8:30 and finished around 12:30.

Fished today with my buddy Alex who is new to the fly fishing game. I started the morning with the black zebra midge with silver bead and silver wire and caught several rainbow trout as we worked our way down.  I switched to a chocolate midge and caught a couple, but nothing to hot.  I then switched to the copper midge below and really started catching some numbers.

We stopped into the Beaver Dam Store on our way out to fish so Alex could pick up some flies and spoke several minutes to Carl that works and ties fly there.  Carl gave us some tips and we talked fly talk for a few minutes then he proceeded to show us a new sub-micro olive jig ( pic below) that he recently tied up.  He gave me one to try, and man did that fly work awesome.  I caught 4 fish on my first 5 casts using that thing.  I then gave it to Alex to try and he proceeded to catch 7 fish until he lost the fly on a bad set.  I’m going to tie some of those up myself and see if I get the same results. Great pattern.

I didn’t fish anything else after switching to the purple midge.  I had 3 in my fly box to start, I used 2 and gave one to Alex and we probably caught 20 fish on that pattern.  I noticed that we started catching great numbers just before 11am and I remembered that the solunar tables (pic below) said the prime time was just before 11am thru around 1pm.  I don’t know if you believe in that philosophy, but I think there is something to that.  I seem to catch a little better when I’m inside those major and minor windows.  I’ve had times I didn’t catch anything during the major time, so I know it’s not full proof, but it’s something to consider when planning your trip. 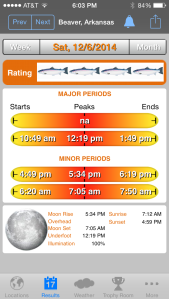 We finally got cold enough by 12:30 that we called it a day.  We just couldn’t tie a fly or tippet well with numb hands.  We caught somewhere around 60 fish together in 4 hours.  By far the best production I’ve ever had on Beaver Tailwaters.

Put together a little video of todays scenery and fishing location along with a couple fish pics.

Video of todays scenery and fish.