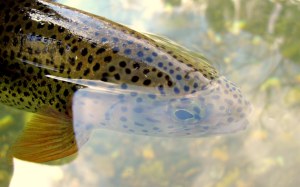 Got out to hit the Beaver Tailwaters for a few hours on Saturday.  Fish were pretty active and some pretty good numbers were caught.  I started fishing just before 10am and had several quick hookups.  Then a hatch came on and the fish were very active on the surface.  I’m not an experienced fly fisher so I went with a Blue Dun emerger pattern and caught several.  They were really keying on a olive color as I caught several  with that color, but I didn’t have any emergers in that color.  I was really neat to actually see the flies just start appearing from no where and the fish reacting to their presence.  That went on for about an hour then the fish just stopped everything.  It was slow for awhile after that feeding frenzy as the fish regained their energy.  After that, the fishing picked back up and I was back to catching again.  I really did well with a wine and gold midge and a variation of the Rootbeer Midge, but with the silver tensil underbody.