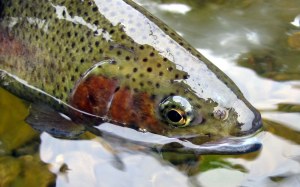 Nice day to get out and hit the Beaver Tailwaters for a morning of fly fishing.  Weather was great and the fishing was pretty good.  Decided to try a section of water I’ve never fly fished before.  I started out down below the Hwy 62 bridge at a private residence and worked my up nearly a mile.  The water is big, slow and wide here.  It was pretty hard to fish this area as the water was just a bit too deep to get a shot at the far bank and the water barely moved.  I worked a couple areas and managed to get a couple, but kept working my way upstream to water I seem to fish better.  I caught one fish on what I call the Pink Butterfly of Death, which is a name inspired by my daughter.  So of course I had to mention it here as well.

A little after 10:30 the bite really turned on.  The fish started rising all over and were very active.  I was throwing a midge I haven’t tied or fished before today and it was a glass head midge.  I was using the Blue Dun color and was getting some great activity from the fish, but everything started going wrong with my line.  I ended up retying my tippet 4 times and lost several flies over a 20 minute time span.  It was crazy to have such a bite going and the equipment just not responding.  I was using a small split shot with the glass bead midge and I think it really caused just enough of a change to everything.  After retying for the forth time I just stayed with the standard tungsten bead midge and continued to catch fish with no issues.  I also had great luck with the Rootbeer Midge and had a couple on Purple and Black.

I tried a couple newly tied scud patterns and didn’t get any activity with those.  Not sure yet how to tie or fish those things.  Also tried a Pheasant Tail Nymph and only managed a single bite.

On my back to the truck I stopped at a big slow hole by the abandon bridge and managed to catch a Cutthroat.  I’ve never caught one here and when talking with the guys at the Dam Store, found they are pretty rare catch.  Fun to catch something like that.