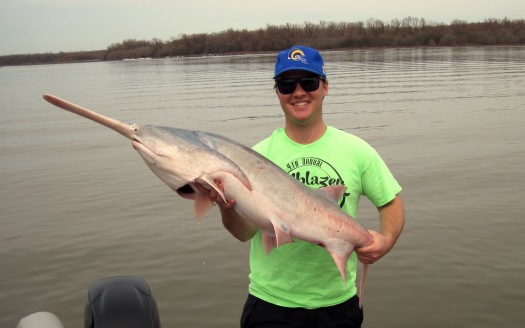 I put the fly rod down for a weekend and headed west to Grand Lake in Oklahoma. We were after White Bass and Spoonbill.

We started off at Twin Bridges State Park which is at the north part of Grand Lake and we headed up Spring River to find White Bass moving into the rivers to spawn. There were plenty of people with the same intentions, unfortunately the white bass haven’t fully got in the mood yet so the numbers were pretty sparse. We managed to catch 9 nice size fish and caught several other smaller ones. I did tie up my own maribou jigs to use. I went with several variations of white and they seemed to produce the best over all other things we tried.  FYI White Bass are more commonly called Sand Bass in OK.

After a few hours of normal fishing we decided to head downstream to pursue the Spoonbill using the snagging technique. I know what you’re thinking, I even felt dirty writing the word, but that’s what you have to do to get a Spoonbill. We fished for a couple hours and only managed to get one Spoonbill. They are also known as Paddlefish is many areas.